Support
the Forum Become
a Member

Organization of the Report

The report is formatted into 16 Chapters each representing the goals reported in this VNR. We have organized each chapter into the following sections for ease of reference:

Challenges in Consolidating this Report and the Way Forward

Some of the challenges encountered in organising this year’s report include: (1) difficulty in reporting by indicators (where the indicator does not quite fit the context the CSOs wanted to report), as opposed to targets, (2) difficulty in organising submissions focused on results and impact (and not just activities) which is what many CSOs are accustomed to, (3) lack of quantitative data to accompany the qualitative results which have been achieved.

Countries like Ghana took to a bottom-up approach in reporting the progress with the intent of leaving no one behind, they included traditional and cultural institutions and even children in the process of the Voluntary National Review reporting. The same aspect goes for Tanzania and Sierra Leone in preparation for their VNR report. In Kenya however, the voices of cultural and traditional institutions have not been captured in the VNR Reports through the years – both by government and CSO’s.

Nevertheless, great strides have been made to meet the attainment of Goal 16 in Kenya such as modernizing the Judiciary’s ICT infrastructure to enhance quality and efficiency of service delivery, increase of the number of High Court stations in the country, additional judges assigned to remote areas and progress in the prosecution of cases of sexual and gender-based violence against women and children among others. There have been also efforts by the Kenyan government to provide access to justice to those in the remote areas by assigning more judges and application of alternative dispute resolution mechanisms.

This is not without some gaps- key among them being coordination and synergies by CSOs on issues of children’s rights, attacks on media houses and journalists, and inclusion of CSO’s contribution to development agendas using evidence and data captured in state reports by the Kenya National Bureau of Statistics.

The table below further highlights key issues from the 2017 and 2019 CSO VNR’s – highlighting what still remained to be implemented. 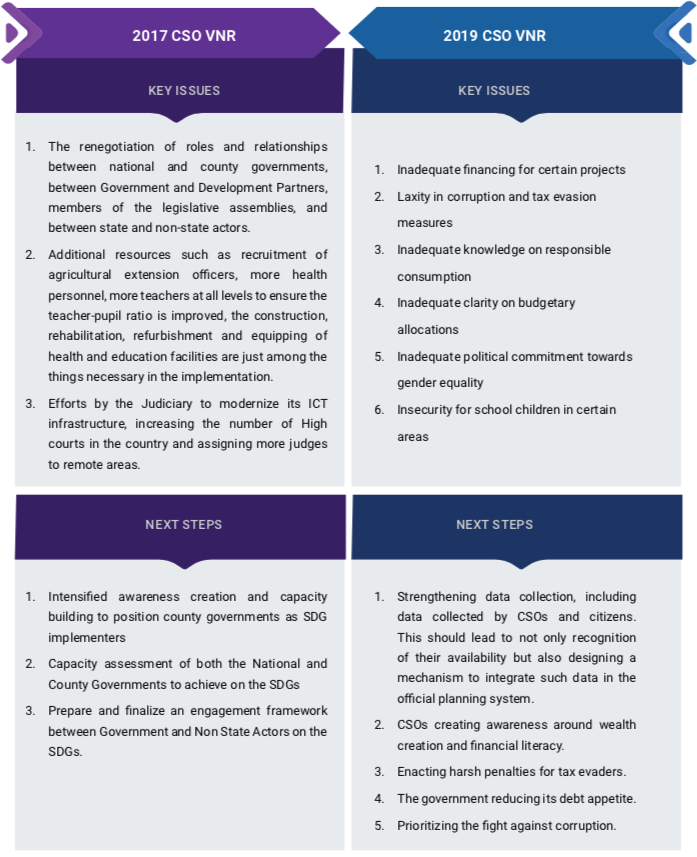